WARNING: Drinking Distilled Spirits, Beer, Coolers, Wine and Other Alcoholic Beverages May Increase Cancer Risk, and, During Pregnancy, Can Cause Birth Defects. 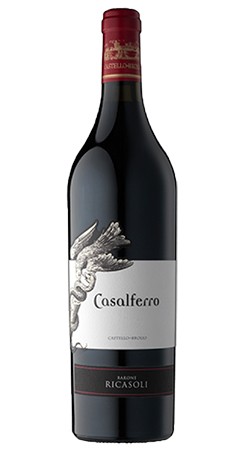 Casalferro was first produced in 1993 upon Francesco Ricasoli’s arrival at the company, and since then inspired him to begin his research into modern methods. Produced only during the best years, Casalferro is a pure Merlot from the vineyard of the same name, a single plot of land, located at 400 m above sea level facing south-southeast. The soil is brown with a fine clay structure very chalky and little organic content.

Wine Specs
Vintage
2013
Appellation
Indicazione Geografica Tipica Toscana
Aging
18/21 months into oak barrels and tonneaux.
Alcohol %
14
Wine Spectator
93
Robert Parker
91
Wine Profile
Vineyard Notes
The 2012 autumn and the 2012-2013 winters were among the rainiest of the last few years. The real spring began on April 10th when it stopped raining and there was a sudden change in temperature with extremely high average day temperatures. Summer had begun with wet soils but the high temperatures and the sunshine accounted for homogeneous bunches. The year was shaped in September: summerlike temperatures during the day falling at night (with a 15°C difference between night and day) that allowed a perfect technological and polyphenolic ripeness. To sum up, a quality harvest with healthy, perfectly ripe grapes. Merlot this year is fresh and of a deep ruby-violet color.